The cello is many people’s favourite instruments in the string family. It’s rich, emotional sound and versatility make it an excellent addition to any production. However, when it comes to things like mic placement or mic choice, recording the cello can be a difficult process.

When I began recording, I struggled regularly with miking the cello. Every time I heard a professional recording it sounded rich, smooth and flawless. However, my attempts always ended up harsh and scratchy.

Overtime I gained a better understanding of the instrument and was able to improve my technique. To help other beginner engineers from making similar mistakes I’ve put together this brief guide. Below you’ll find some of the most important tips to keep in mind when recording cello, from finding the right cellist to proper mic placement.

1. A Good Cellist Is Integral 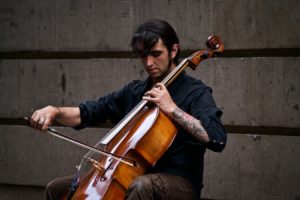 It’s always a good idea to start with a great musician before you even think about placing a microphone on the floor and cello is no exception. In fact, the nature of the cello requires and exceptional player more so than most other instruments.

Unlike guitar, their aren’t any frets on a cello. So it’s up to the cellist to find the notes on the neck. Tuning is therefore reliant on the musician and it requires years of practice to be able to do so properly.

On top of that, vibrato is also a required aspect of the cello’s voicing. Not only does it mask tuning issues but it also adds a level of emotion that can’t be achieved otherwise.

If you’re cello player is lacking in these areas you’re going to have a hard time recording it. This is often the reason amateur engineers have problems with the instrument. If you have an amateur cello player, no amount of mic choice, mic placement or otherwise will fix it. This is a mistake I often made when first starting out recording stringed instruments. I thought if I recorded the same cello or violin multiple times it would sound like and orchestra but I was wrong.

Big orchestral recordings sound the way they do because of a number of factors. It’s the difference in styled between musicians and tone of their instruments when combined with the sound of a large room that contributes to this.

Although you may be able to achieve something reminiscent of these recordings, it will more or less sound like one cello recorded multiple times.

That said, there is beauty in the sound of a solo cello when played and recorded well. So, it’s important to set realistic expectations before entering the studio. This will better inform things like mic placement and choice when it’s time to record the cello.

The cello is an instrument that’s very similar to the human voice. As with a vocalist, every microphone will have a different sound when used on different cellos. Because of this, finding the proper mic to place on your cello makes a big difference.

Ninety-nine times out of a hundred I will choose a condenser microphone to use on cello. They do an excellent job of capturing the full spectrum of sound the cello can produce.

A small diaphragm condenser may give a focus sound and is a great choice when recording in a room with other instruments. It also is useful when you’re placing multiple microphones on the cello and want to capture various areas of its sound.

On the other hand, using a large diaphragm condenser will capture a more complete image. This makes it a great choice when using only one microphone. It will often do a better job of capturing the low end characteristics of the cello as well.

If you have the luxury of using a nice ribbon or tube microphone on the cello, these can both produce gorgeous results.

If you have a lot of choices and aren’t sure which to use, perform a shootout or track a few microphones at once then pick your favourite. Alternatively, the video below is a great shootout out of various microphone choices and placements.

The final stage in recording cello is to find the proper microphone placement to use. Unfortunately there is no real one size fits all solution as every cello will emanate sound in a different way.

Before you start, ask your cello player if they have a preferred placement for the mic. They know their instrument best and may have an idea of where it’s been recorded in the past. This makes a great starting place when setting things up.

It’s also a good idea to have your cellist play while you walk around and listen to how it sounds from various perspectives. Find a spot that it sounds best from and try placing a microphone there.

My go-to position is to place a microphone slightly up and to the right of the cello’s  bridge. It will usually be angled down slightly and sit about one to two feet from the instrument.

If more string noise is needed turn the microphone more towards the bridge. Contrarily, turning it towards the F-Hole will give you more of the low end body.

Check out the video below to get an idea of other cello mic placement positions.

One last tip I’d like to add is to try placing your microphones in omni mode if you have that option. Doing so cuts down on low end build up due to proximity effect and captures a more open and pure sound of the cello.

Be aware however that this could also potentially cause more harm to the cello’s sound. This can happen if the room you are recording in has less than satisfactory acoustics. Omni mode will pick up on everything in the room, including the reflections off the walls of your studio.

If this is the case, it may be better to compromise and place a cardioid microphone on your cello. The video below gives some additional mic placement ideas and also discusses the concept of using an omni mic on cello. By now you’ve probably realized there’s a lot to keep in mind when it comes to recording the cello. Always set realistic expectations and start with a talented musician. Once you have things in order proper mic choice and placement on the cello is key.

I wanted to keep this guide brief so it’s really just the tip of the iceberg on the matter. If it all seems a little daunting already there are other options out there. Consider hiring a professional not only to play on the track but also to record it.

The Sundown Sessions Studio has some of the best session musicians in the world ready to bring your track to the next level. Check out our pricing and packages page for more information.

If you enjoyed this post, subscribe to our email list and check out the rest of the Sundown Sessions Blog for more tips and tricks on home recording and mixing music.