The acoustic guitar is one of the most widely used instruments in the music industry. It’s found its way onto countless records and continues to be a weapon of choice for all songwriters. Despite its prominence mixing acoustic guitar can be a difficult task for the beginning engineer.

When I was first getting started mixing home recordings the acoustic guitar had me stumped. I would spend hours trying to dial in the perfect sound with little progress. All my attempts never sounded how I pictured and the more I worked at it the worse things got.

When speaking with many other beginner mixing engineers I found that I wasn’t alone in my troubles with the acoustic guitar. Fast forward several years and I’ve uncovered a number of techniques that make the process easier.

By sharing them in the steps below you’ll avoid making the same mistakes I did when starting out. After applying these techniques you’ll be well on your way to mixing acoustic guitar with ease, every time.

1. Get It Right At The Source

This may seem like an obvious point to some, but you’d be surprised at how little this is done. If the acoustic guitar sounds bad when recorded, no amount of mixing can change that.

Listen and be aware of how the guitar sounds during the tracking sessions. If something seems off, move or change a microphone. Play around until you actually get a sound that is worth capturing.

When you record something that sounds great at the source it’s ten times easier to make it sound amazing down the road.

Check out our article on miking acoustic guitar for more tips on how to get an awesome sound in the tracking stage. If you’ve read any of my other articles, you know this is a rule that I live by with all instruments. Before you even begin mixing your acoustic guitar, decide what purpose it is serving the song.

Is it the focal point of the arrangement or is it merely a small piece of a bigger production? Does it primarily add a rhythmic or harmonic aspect to the song? What’s wrong with the way it sounds now and how would you like that to change?

Asking yourself these questions when you’re mixing any instrument can give you a more calculated approach to your work. If you don’t know how it’s supposed to serve the song, you’ll end up running in circles with nothing to show.

3. Listen To The Bigger Picture

A common mistake is to solo an instrument when you’re making changes to it’s sound. Going back to thinking about the role of your acoustic guitar, this approach can hinder your mixing.

You’ll end up listening to the acoustic guitar only and make uneducated decisions over what to change. You might make the guitar sound good on it’s own. However, once un-soloed  you’ll be scratching your head as to why it doesn’t sound good anymore.

This is because all of the other mix elements affect the sound of your acoustic guitar. Listening to it in context of everything else is the only way to make adjustments that enhance the overall mix.

Sometimes you may record you guitar in stereo only to find a lack of low end content. When this happens there’s a good chance that your mics are out of phase with one another.

To check if this is the case, pan both microphones up the centre then flip the phase on one of the channels in and out.

You’ll find that one of the positions of the phase switch has deeper low end content. This is the proper setting to use so that both of your acoustic guitar mics are in phase when mixing.

Check out the video below for a better understanding of fixing phase cancellation. Although, the video is for drums, it’s equally applicable when mixing acoustic guitar. 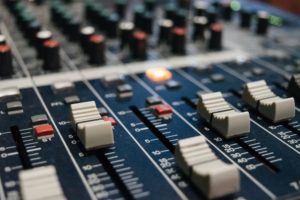 Once again, this is a tip for mixing acoustic guitars that have been multi-miked. You always want to make sure that the signals from each microphone are balanced to match each other in volume.

This ensures the guitar is properly centred and that neither microphone pulls the listeners ear to one side.

You also want to make sure that the acoustic guitar is balanced with the other aspects of a mix. Obviously if it’s a focal point of the artists sound you want it fairly high in volume. Alternatively, if it’s not integral to the arrangement you can lower its volume considerably.

6. Use Busses To Make Mixing Easier

If the acoustic guitar was recorded using multiple microphones or their are various guitar parts in the mixing session, it can be hard to keep everything under control.

When trying to manage tracks and levels, bussing is your friend. Send all the multi-microphones used on a single acoustic guitar to a mix buss. You may even send each separate guitar part to another buss with all the guitar parts feeding it.

This may seem a bit redundant and pointless in the beginning. However, as you mix further and need to make quick changes, you’ll be grateful you took the time to organize things early on.

Despite what you may think, recording and mixing music doesn’t always require you to use a stereo setup. Once again it depends on the purpose of the acoustic guitar in the mix.

If it needs a big, wide sound and is the focal point of a song, than it’s probably best to utilize stereo microphones. However, in cases where the acoustic guitar is just supposed to be a small part of a dense arrangement, only mixing one microphone will suffice.

8. Using EQ To Remove The Bad

EQ is possibly the biggest place where beginner engineers struggle when mixing acoustic guitar. Often times this is because they try to add frequency content to the guitar, before fixing any issues.

Instead it’s best to first remove parts of the acoustic guitar’s sound that could be hurting your mix. The biggest one is using a high pass filter (HPF) to roll off a healthy amount of low end.

Try setting your HPF to at least 120Hz – 150Hz as a starting point. Then remove more depending on the density of the arrangement. As already mentioned, don’t do this with the track soloed.

Listen in context of the track and keep removing low end content until you hear it negatively affecting the sound. Once you do, back off the other way a little and you’ll be at a safe place.

You’d be surprised at how little low end is need in a heavy arrangement. You may even end up setting your HPF as high as 300hz.

Other areas to remove with EQ include the 400-600hz range if things are sounding muddy and boxy. Also, the 3kHz – 6kHz area if the pick noise is too aggressive.

9. Using EQ To Enhance The Good

Once you’ve focused on removing the bad frequency content in your guitar, you can begin to shape the sound of it by adding EQ. Don’t go overboard with this step. One or two broad strokes of EQ with a wide bandwidth will more than suffice.

If you’re looking for the guitar to serve a more harmonic role add some content in the 500Hz – 800Hz range. On the other hand if it’s a rhythmic part, you can add more of the pick sound by boosting arround 4kHz – 8kHz.

Once I’ve shaped the sound of the acoustics with EQ I’ll often mix in some compression to get the dynamics of the guitar under control. My approach to this once again circles back to the overall purpose of the instrument.

If you want to bring out the rhythmic picking, try setting a medium attack time (20 – 40ms) with a medium release. Alternatively to pull back on the picking and bring out the body of the chords, set your attack time very fast and a release time of 20 – 40ms.

Check out the video below for some tips on compressing acoustic guitar, particularly a more rhythmic style.

A stereo delay can be a great way to give your acoustic guitar some energy in the mix. The effect should be used in moderation however because too much can make things overly busy.

The best approach when using this effect is to roll out a fair amount of the high end (above 3kHz) and the low end (below 300Hz). This will keep the delay from getting overly busy or muddy and allow it to simply hug the harmonics of the guitar.

When timed with the rhythm of a song and used in a dense mix, the listener shouldn’t directly hear that delay is being used. It will be noticeable when the delay isn’t there however. Once again, a little goes a long way.

The acoustic guitar begs for reverb to be added, especially with a more gentle part. Reverb is a great way to give the guitar a wider spread and push it a little farther back in the mix.

Try playing with a reverb that has a medium length decay of around 1-2 seconds. A pre-delay of around 30ms will push it back in the mix but still keeping it somewhat forward, while 50ms and above will make it quite distant.

As with delay, rolling of the high and low end is a wise choice, this gives you a warm sounding reverb that isn’t overly busy.

It’s worth mentioning that my favourite reverb of all to use on acoustic guitar is the UAD AKG BX 20. It’s a little pricier than other options but sounds gorgeous in this context.

13. Bring Your Mixing To The Next Level With Automation

Often times in folk and singer-songwriter genres a track may begin with only the acoustic guitar and vocals in the mix. As the track builds, more elements are added to the point where the guitar is not nearly as important anymore.

This can present some problems, as you may want the guitar to have a very full sound in the beginning and thin out as the track builds.

The solution is to use automation to progress the sound of your guitar as the rest of the mix builds. Automating even just the HPF of your EQ can have a really great affect on things. The video below is an awesome example of using automation to mix acoustic guitar.

If you’re not a fan of writing in automation, another option is to split the separate sections of the guitar onto multiple tracks. You can then apply individual EQ and other effects to each track, depending on what the arrangement calls for.

For such a simple instrument, you’ve probably now realized that there’s a lot to consider when mixing the acoustic guitar. Don’t be intimidated however, after applying these techniques on a few songs it’ll soon become second nature.

The biggest takeaway from this article should be to always consider the role of the acoustic guitar in the mix. This will inform how you use EQ, compression, reverb and delay. Checking the phase of microphones and properly balancing them with busses is also important to consider as you mix.

Finally, using automation will help your guitar’s sound progress as the track builds. Follow these tricks and you’re sure to bring the sound of your acoustic guitar to the next level in no time.

If you enjoyed this tips, be sure to check out the rest of the Sundown Sessions Blog, especially these tips for properly miking an acoustic guitar.